The Spring Festival is the most important festival for the Chinese people and is when all family members get together, just like Christmas in the West. All people living away from home go back, becoming the busiest time for transportation systems of about half a month from the Spring Festival. Airports, railway stations and long-distance bus stations are crowded with home returnees.

The Spring Festival falls on the 1st day of the 1st lunar month, often one month later than the Gregorian calendar. It originated in the Shang Dynasty (c. 1600 BC-c. 1100 BC) from the people’s sacrifice to gods and ancestors at the end of an old year and the beginning of a new one.

Strictly speaking, the Spring Festival starts every year in the early days of the 12th lunar month and will last till the mid 1st lunar month of the next year. Of them, the most important days are Spring Festival Eve and the first three days. The Chinese government now stipulates people have seven days off for the Chinese Lunar New Year.

Many customs accompany the Spring Festival. Some are still followed today, but others have weakened.

On the 8th day of the 12th lunar month, many families make laba porridge, a delicious kind of porridge made with glutinous rice, millet, seeds of Job’s tears, jujube berries, lotus seeds, beans, longan and gingko.

The 23rd day of the 12th lunar month is called Preliminary Eve. At this time, people offer sacrifice to the kitchen god. Now however, most families make delicious food to enjoy themselves.

After the Preliminary Eve, people begin preparing for the coming New Year. This is called “Seeing the New Year in”.

To clean houses on the New Year Even is a very old custom dating back to thousands of years ago. The dust is traditionally associated with “old” so cleaning their houses and sweeping the dust mean to bid farewell to the “old” and usher in the “new”. Days before the New Year, Chinese families clean their houses, sweeping the floor, washing daily things, cleaning the spider webs and dredging the ditches. People do all these things happily in the hope of a good coming year. 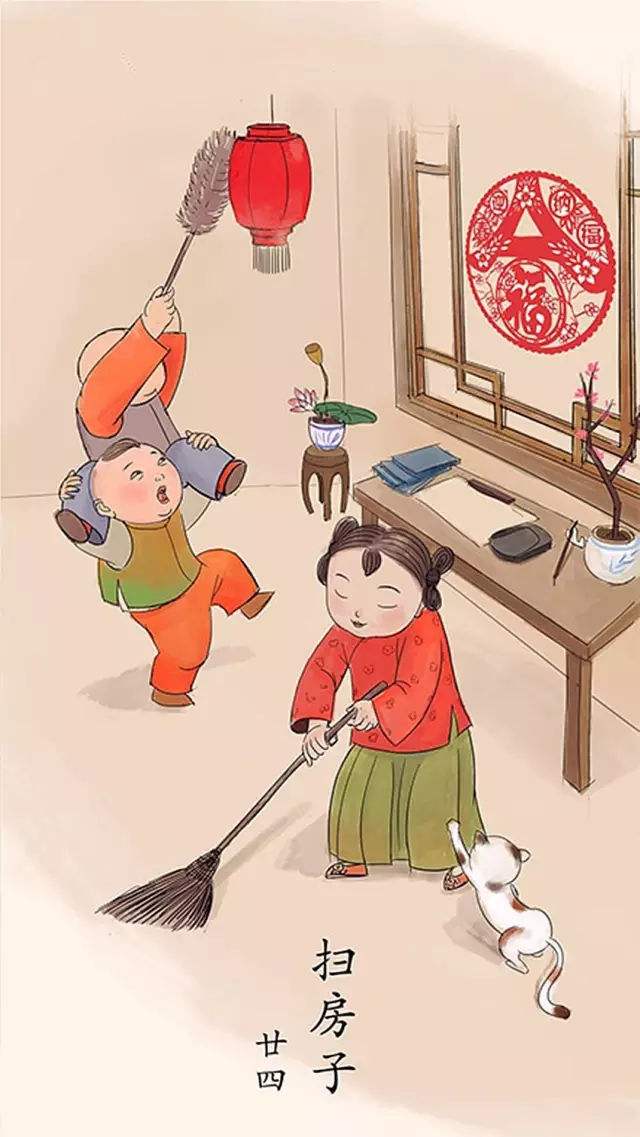 One of the house decorations is to post couplets on doors. All the door panels will be pasted with Spring Festival couplets, highlighting Chinese calligraphy with black characters on red paper. The content varies from house owners’ wishes for a bright future to good luck for the New Year. Also, pictures of the god of doors and wealth will be posted on front doors to ward off evil spirits and welcome peace and abundance.On the Spring Festival couplets, good wishes are expressed. New Year couplets are usually posted in pairs as even numbers are associated with good luck and auspiciousness in Chinese culture.

The Chinese character “fu” (meaning blessing or happiness) is a must. The character put on paper can be pasted normally or upside down, for in Chinese the “reversed fu” is homophonic with “fu comes”, both being pronounced as “fudaole.” What’s more, two big red lanterns can be raised on both sides of the front door. Red paper-cuttings can be seen on window glass and brightly colored New Year paintings with auspicious meanings may be put on the wall. 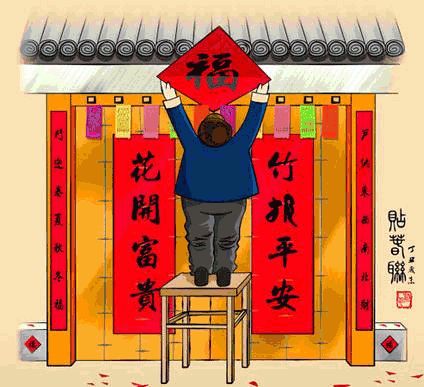 Waiting for the First Bell Ringing of Chinese New Year

The first bell ringing is the symbol of Chinese New Year. Chinese people like to go to a large squares where there are huge bells are set up on New Year’s Eve. As the New Year approaches they count down and celebrate together. The people believe that the ringing of huge bell can drive all the bad luck away and bring the fortune to them.

Spring Festival is a time for family reunion. At that time, all family members eat dinner together. The meal is more luxurious than usual. Dishes such as chicken, fish and bean curd cannot be excluded, for in Chinese, their pronunciations, respectively “ji”, “yu” and “doufu,” mean auspiciousness, abundance and richness. The food eaten on the New Year Even banquet varies according to regions. In south China, It is customary to eat ‘niangao’ (New Year cake made of glutinous rice flour) because as a homophone, niangao means ‘higher and higher every year’. In the north, a traditional dish for the feast is ‘Jiaozi’ or dumplings shaped like a crescent moon. After the dinner, the whole family will sit together, chatting and watching TV. In recent years, the Spring Festival party broadcast on China Central Television Station (CCTV) is essential entertainment for the Chinese both at home and abroad.

Shousui means to stay up late or all night on New Year’s Eve. After the great dinner, families sit together and chat happily to wait for the New Year’s arrival。 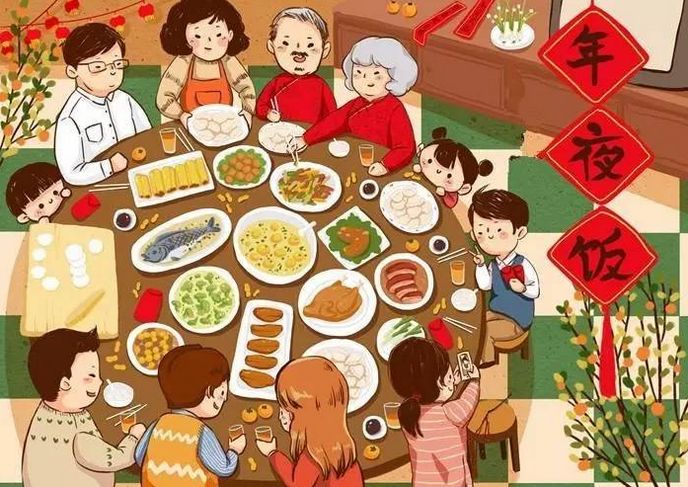 Lighting Firecrackers used to be one of the most important customs in the Spring Festival celebration. However, concerning the danger and the negative noises that lighting firecrackers may bring, the government has banned this practice in many major cities. But people in small towns and rural areas still hold to this traditional celebration. Right as the clock strike 12 o’clock midnight of New Year’s Eve, cities and towns are lit up with the glitter from fireworks, and the sound can be deafening. Families stay up for this joyful moment and kids with firecrackers in one hand and a lighter in another cheerfully light their happiness in this especial occasion, even though they plug their ears. 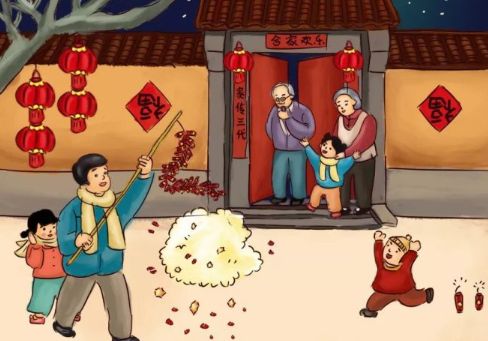 On the first day of the New Year or shortly thereafter, everybody wears new clothes and greets relatives and friends with bows and Gongxi (congratulations)， wishing each other good luck, happiness during the new year. In Chinese villages, some villagers may have hundreds of relatives so they have to spend more than two weeks visiting their relatives. 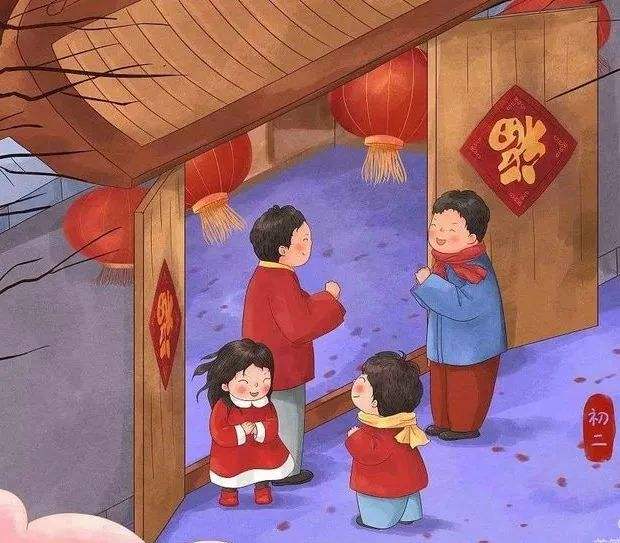 It is the money given to kids from their parents and grandparents as New Year gift. The money is believed to bring good luck, ward off monsters; hence the name ‘lucky money’. 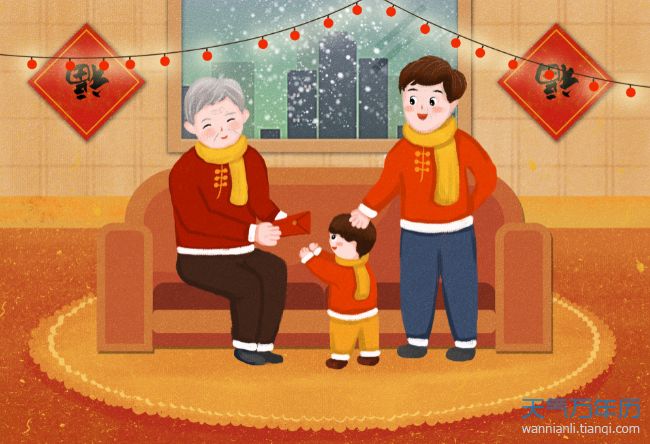 The lively atmosphere not only fills every household, but permeates to streets and lanes. A series of activities such as lion dancing, dragon lantern dancing, lantern festivals and temple fairs will be held for days. The Spring Festival then comes to an end when the Lantern Festival is finished. 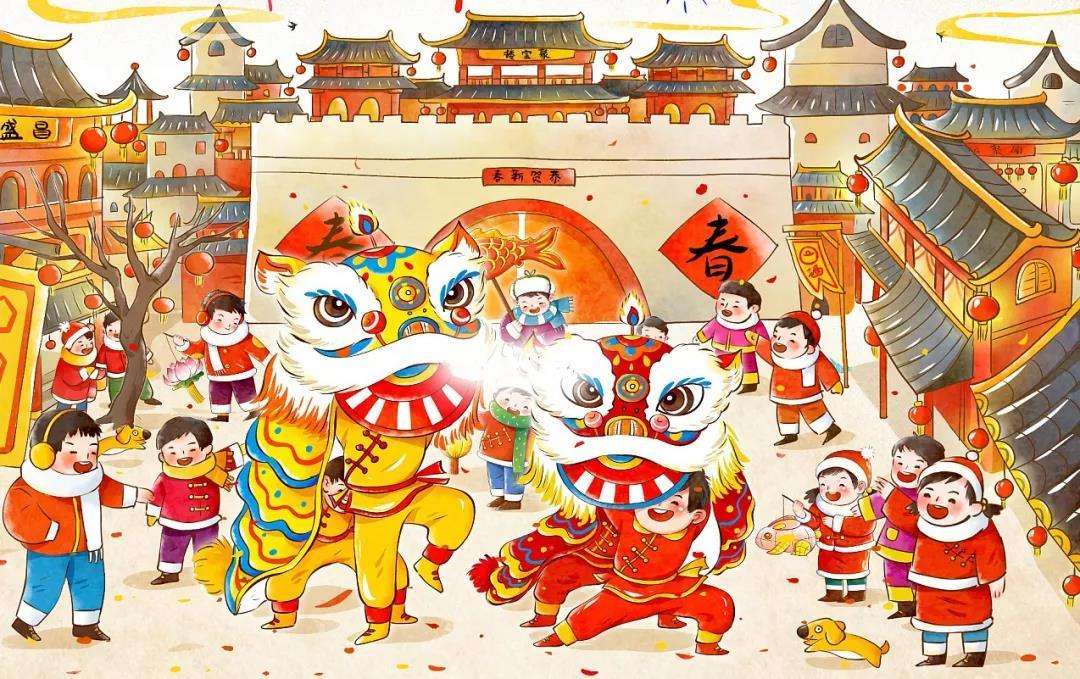